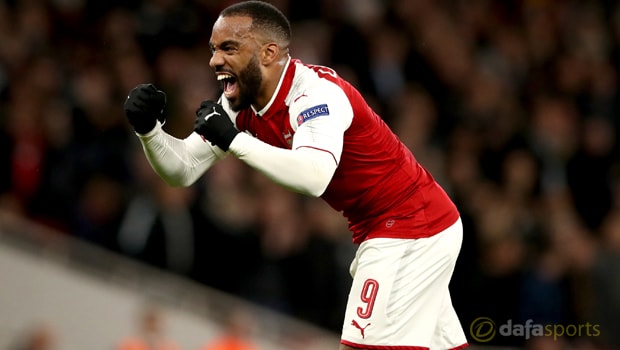 The France international returned from knee surgery as a substitute during the Gunners’ 3-0 victory over Stoke in the Premier League on Sunday, bagging the final goal in that contest, while he is now expected to start the first-leg of their Europa League quarter-final tie with CSKA Moscow on Thursday.

The 27-year-old has netted 10 goals in 30 appearances for Arsenal since joining the club from Lyon during the summer and Wenger is pleased to have both him and Danny Welbeck available for Thursday’s contest, as January recruit Pierre-Emerick Aubameyang is not available to play in the Europa League this season.

“It is good to have him back, because it gives us different opportunities,” Wenger said.

“Danny is more a guy who goes behind, whereas Lacazette is more combination play, so to have both options is important.

Lacazette had only scored one goal in his last 14 Arsenal appearances before he underwent surgery, but Wenger does not believe that was a true reflection on his abilities, as he was playing through the pain barrier for much of that time.

“I realise now, when I see him (Lacazette) in training, that he was not himself for a while,” he added.

“That explained why scoring goals dried out. He was always adamant, ‘I am okay, I am okay’, but players are like that.

“It was not dramatically different before, he was a good player. But I think, in the last seven or eight games he played, he was not completely free with his knee.”

Arsenal are priced at 1.30 to secure a first-leg advantage from their clash with CSKA Moscow, while the Russians are available at 9.00 to win Thursday’s match and the draw is on offer at 4.75.