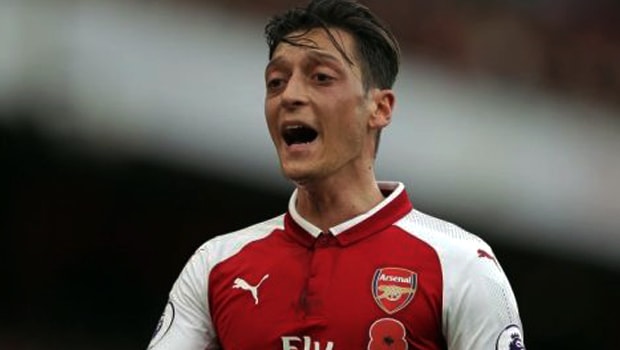 Arsene Wenger has insisted Arsenal have had no contact from rivals Manchester United about signing World Cup winner Mesut Ozil in January.

The Germany playmaker will enter the final six months of his contract at the Emirates Stadium next month so will be free to talk to other clubs about a free transfer at the end of the season.

Reports have suggested Jose Mourinho, who worked with Ozil at Real Madrid, is keen to be reunited with the 29-year-old, but Wenger says he is unaware of any interest.

Speaking to reporters ahead of Saturday’s Premier League clash with Newcastle United, Wenger said: “How close [to new deal]? I don’t know, but he will stay here.

“We have never been approached by Man United in any way so I don’t see why that came up, or who found it. It has been created. [He stays] until the end of the season, for sure.

“They will all stay. It’s very difficult for me to tell you because I will analyse every case separately, but overall my wish and desire is everybody stays.

“If you come in and tell me ‘I will offer you this for this player’, I will tell you yes or no.”

Alexis Sanchez is another high-profile Arsenal player about to come to end of his Arsenal contract and sections of the Gunners’ faithful have fallen out with the Chile livewire over his performances, but Wenger has insisted he has no problem with the former Barcelona star.

“He’s focused in training,” Wenger said. “It’s true at the moment things don’t come off as much as before; you go through those periods and maybe to try and force things too much.

“He fights, always tries to make a difference, maybe he is less successful in finishing, but overall I cannot fault his attitude.”

Arsenal next take on Newcastle and are currently priced 1.25 in the 90-minutes market while the draw outcome is quoted 6.00. The Magpies are available to back at 11.00.