Arsenal’s problems mount at the back 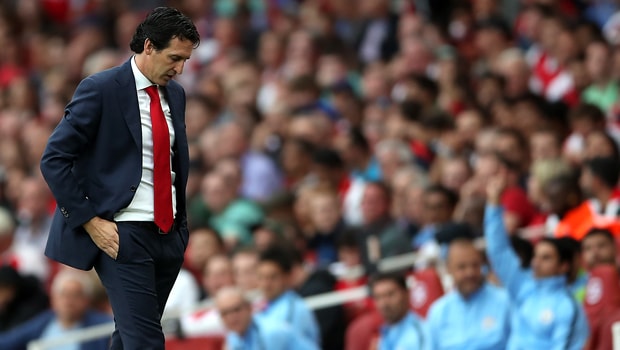 Unai Emery is already facing a selection headache one game into his Arsenal reign after the club confirmed Ainsley Maitland-Niles will be out for between six to eight weeks.

England Under-21 international Maitland-Niles was deployed in the left-back position for Arsenal’s 2-0 defeat to defending champions Manchester City on Sunday, but his afternoon was cut short due to injury.

The 20-year-old was forced off in the 35th-minute after picking up a leg injury and the club have now revealed he has sustained a small fracture to his left fibula, potentially keeping him out of action for two months.

His injury comes as another defensive blow to Emery, who is already without left-back Sead Kolasinac, captain and centre-back Laurent Koscielny and full-back Carl Jenkinson.

Arsenal confirmed the skipper is hoping to return to training in November, Kolasinac is being aimed for a return in October whilst Jenkinson is facing six to eight weeks out after sustaining a significant sprain to his right ankle.

However, the Gunners have been handed some good news with defender Nacho Monreal and forward Danny Welbeck both returning to full training after their respective injuries.

Next up for Emery’s side is a trip to Chelsea on Sunday and the visitors are the 4.20 outsiders to pick up all three points, a draw is priced at 3.80 whilst the hosts, who beat Huddersfield 3-0 last time out, are 1.83 favourites.

The former PSG boss will have a big decision to make ahead of the trip to Stamford Bridge on whether to drop Mesut Ozil after the midfielder received criticism for his performance last Sunday.

France international Alexandre Lacazette is pushing for a start after producing a lively display when coming on for Aaron Ramsey in the second half.