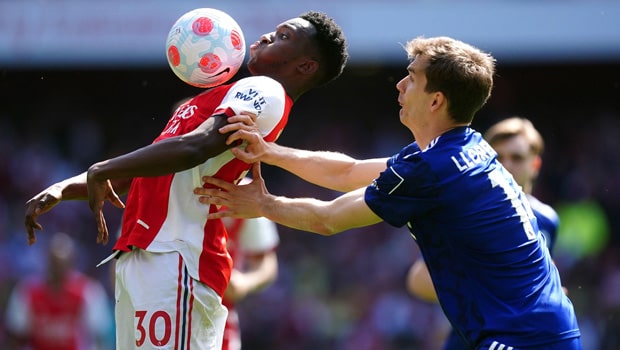 Eddie Nketiah’s early double (5′, 10′) helped Arsenal cruise to a 2-1 win over 10-man Leeds United Sunday as the Gunners moved four points clear of No. 5 Tottenham on the Premier League table. Luke Ayling received a red card in the 27th minute for Leeds.

Arsenal’s win this weekend combined with Tottenham’s draw helped the Gunners solidify their spot in the top four heading into the upcoming London derby.

“We are finding ways to win football matches,” Arsenal manager Mikel Arteta said. “The way we played today, especially the first 30 minutes was brilliant. So under pressure to play the way we have done in front of our people is a credit to them, but obviously, we have an opponent and the context changes throughout the game and you don’t expect to be all the time for 95 minutes on top of the game and we are dealing with that and getting better at it because at the end, we are winning football matches.”

Nketiah became just the second Arsenal player to score twice in the opening 10 minutes of a Premier League game.

He has four goals in his last four league fixtures; he had five in his previous 52.

“It’s always nice to score but it was a big three points,” Nketiah said. “We’ve been working hard and want to get it for the fans. It’s amazing to get the three points, it moves us closer to our objectives.”

Arsenal won the possession battle 63-37, finishing with 9 shots on target compared to just two for Leeds. 15 of the 19 shots overall were inside the box.

Leeds made three changes to their lineup ahead of the match. Daniel James, Diego Llorente and Joe Gelhardt came back in, with Pascal Struijk and Rodrigo moving to the bench and Stuart Dallas ruled out for the season.

Leeds clearly struggled to get any sort of momentum early on in the match.

“I’d just say we dug ourselves a massive hole and made a difficult task much, much more difficult,” Leeds manager Jesse March said. “So obviously far from the start that we wanted, but our resolve and our fight when the game was incredibly hard was amazing.”

They drop to the bottom three with the result.

“I know there’s no rewards that don’t come away with points right now for us, especially now that we’re actually in the relegation zone,” Marsh added. “But we have to stay positive, we have to stay strong and we have to forge on. And that’s the only way we can operate right now. Even the message after the game was that our focus is fully on Chelsea right now to do whatever we can to recover and prepare ourselves for a big match on Wednesday.”

Leeds will host Chelsea on 11 May. Arsenal will set their sights on Tottenham next as the north London rivals take center stage on Thursday, 12 May.