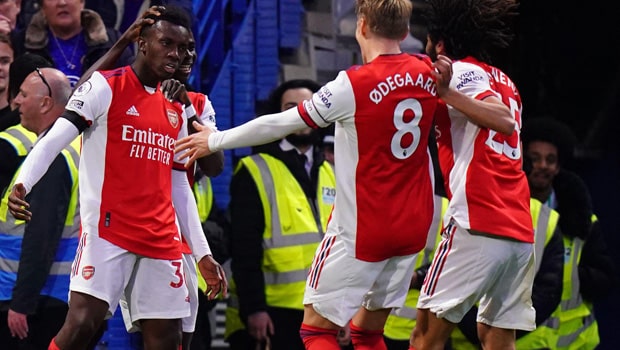 Arsenal revived their chances of finishing in a UEFA Champions League place after beating Chelsea 4-2 at Stamford Bridge on Wednesday evening.

The Gunners had lost their last three games in the Premier League, putting their chances of finishing in the top four places in jeopardy as they sat three points behind Tottenham Hotspurs in fourth before the encounter.

However, Mikel Arteta’s side had some key fitness issues with striker and captain Alexandre Lacazette out of the game; the French forward is also subject of a potential move during the summer as the former Lyon striker revealed that he had started discussions with other clubs in search of UEFA Champions League action next season.

Chelsea were favorites going into the tie after winning their last two Premier League matches, scoring eight goals, and conceding none.

However, it was Arsenal who scored first through Eddie Nketiah in the 13th minute before Timo Werner equalized four minutes later. Emile Smith Rowe put Arsenal back in front in the 27th minute.

Ceaser Azpilicueta made sure the first half ended in a tie. Arsenal got back in front a few minutes before the hour mark through Eddie Nketiah, while Bukayo Saka sealed the win with a penalty in stoppage time to make it a 4-2 final score.

The win is Arsenal’s first in their last four matches, and it puts them level on points with Tottenham. Striker Bukayo Saka sees the result as a huge one after three losses in a row.

“We wanted to give the fans something to believe in us, and we did that. We showed fight and character. It’s a huge result. It means a lot to us. Losing three games in a row is really difficult.” Saka said.

Meanwhile, Manchester City kept up with a win after beating Brighton 3-0, and goals came from Mahrez, Foden, and Bernardo Silva.