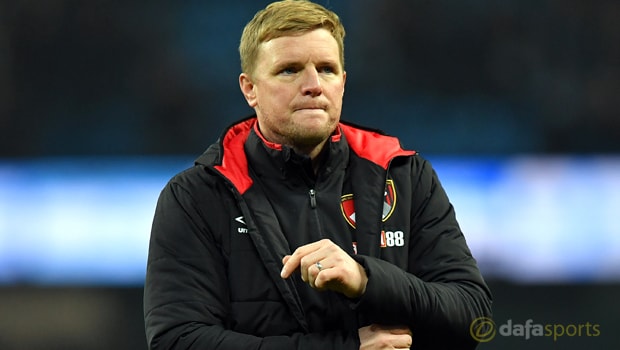 Eddie Howe believes Saturday’s 2-1 win over Everton will prove “massive” in the context of Bournemouth’s season.

The Cherries went into the game without a win in nine and were fortunate to gain a point on Boxing Day when Callum Wilson controversially equalised in stoppage time against West Ham.

However, they broke their duck on Saturday as a brace from Ryan Fraser, the latter of which came in the 88th minute, saw them end Sam Allardyce’s unbeaten start as Toffees boss.

The result sent rapture around the Vitality Stadium and was good enough to move them out of the relegation places and up to 13th in the table.

After a tough run of fixtures, they face another crunch game on Monday when they travel along the south coast to Brighton.

The 40-year-old has seen his methods questioned in recent months but believes Saturday’s win can be the start of something special for his side.

“A massive win – we got our reward finally after a tough fixture list,” he told Match of the Day.

“We should have beaten West Ham and didn’t but we kept on going. Ryan Fraser has been excellent in recent weeks and he deserved the two goals.

“You don’t want to be in the bottom three for a second, we’ve had to deal with that but we’re out now.

“Runs of results can make a massive difference to a season, it’s so tight in this league.”