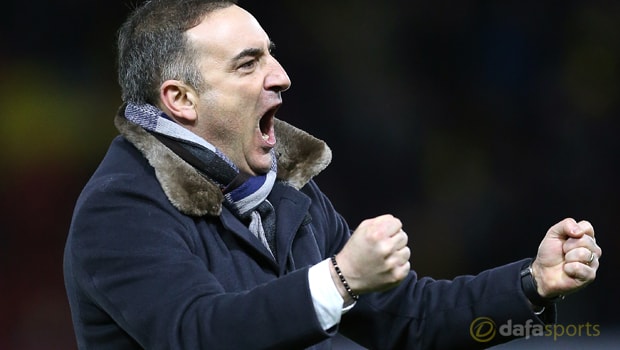 New Swansea boss Carlos Carvalhal believes his side’s positivity paid off as they claimed a 2-1 win at Watford on Saturday.

The Portuguese has had a whirlwind week, being sacked by Championship Sheffield Wednesday on Christmas Eve, only to be drafted in by the Swans on Thursday.

Just 48 hours and two training sessions later, he stepped into the dugout for the first time at Vicarage Road and got off to a difficult start as Andre Carillo netted for the hosts after just 11 minutes.

With two up front, the Swans kept themselves in the game and were rewarded when Jordan Ayew grabbed an equaliser with four minutes to go, before Luciano Narsingh scored the winner in the dying embers.

Tuesday sees Carvalhal’s men welcome Tottenham for a game they are the 11.00 outsiders to win, with the draw 6.00 and Spurs 1.29.

After climbing off the bottom of the table on Saturday, the Portuguese has hinted that he will stick with his optimistic approach going forward.

He believes his side deserved the points at Vicarage Road and has hailed the commitment of his players following a dramatic couple of days since his arrival.

Carvalhal told Match of the Day: “We tried everything to win. Watford are very strong. We felt a little lucky in moments, but Watford were lucky also.

“The game is like this, but we prepared very well, changed the formation and had just two training sessions with the team.

“I must give congratulations to my players. They are better players than they are showing. They need a plan and a dynamic. During the game they were better and better.”