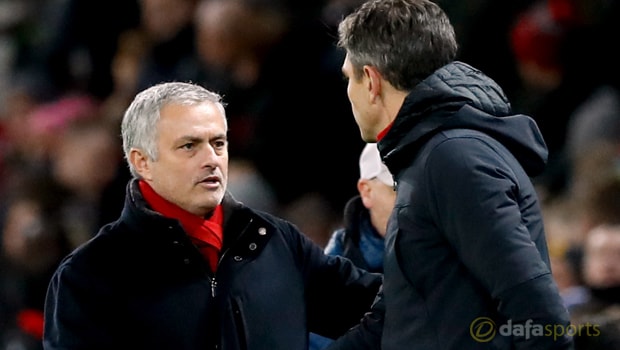 The Red Devils again struggled to break their opponents down at Old Trafford, extending their run to four without a win in all competitions.

Chelsea’s 5-0 victory over Stoke means United have now slipped to third and their plight has been made worse by the excellence of local rivals City, who already appear to have the title wrapped up.

Worryingly for United, striker Romelu Lukaku could face a spell on the sidelines following a wince-inducing clash of heads with Saints’ defender Wesley Hoedt, which resulted in the Belgian being stretchered off.

However, much of the talk after the game surrounded referee Craig Pawson’s performance, most notably his decision not to award a penalty for a Maya Yoshida handball.

Jose was far from impressed by Pawson’s call but insists that despite his side’s frustrations, he is happy with what he is seeing.

Mourinho said: “Especially the minute the referee didn’t give a clear penalty.

“We played enough to score goals, of course we missed easy chances. But I am really unhappy with the penalty.

Not with Craig’s performance overall, but with the penalty. I think Craig had a game without problems, but it is a big decision.”

United are back in action on Monday when they take on Everton at Goodison Park.