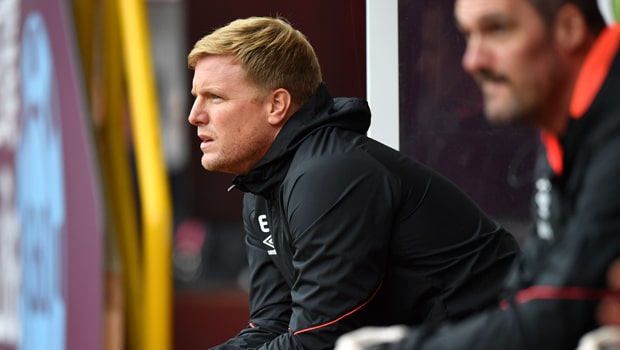 Eddie Howe says he is expecting a tough test when Crystal Palace are the visitors to the Vitality Stadium on Monday night.

The Cherries have had an excellent start to the new Premier League season, slightly dented by their 4-0 loss away at Burnley last weekend.

However, they remain eighth in the league table after three wins from their six games so far but boss Howe says Palace will be a tough test.

He told a press conference ahead of the game: “We have always found Crystal Palace to be very tough competitors, very good squad, very good manager, so I don’t envisage this game being too different from the previous ones.

“I just hope that we find the margins in our favour this time.”

Howe went on to praise opposite number Roy Hodgson who he said deserved a great deal of credit for keeping the Eagles in the league last season after such a terrible start with Palace losing their first seven games of the league season without scoring a goal.

This season Hodgson’s team have made a more steady start, sitting 11th in the table, drawing with Newcastle at Selhurst Park last weekend.

Wilfried Zaha has started the new season in form and has been instrumental in Palace’s wins but Howe was keen to stress that the Eagles were far from a one-man team.

“Wilfried Zaha is a player that we need to be aware of, but they’ve also got excellent midfielders with a lot of experience, so we’ve got to manage it well,” he added.

Both sides were in action in midweek, in the EFL Cup and both are through to the fourth round of the competition, Bournemouth beating Blackburn 3-2 and Palace overcoming another Championship side West Brom 3-0.