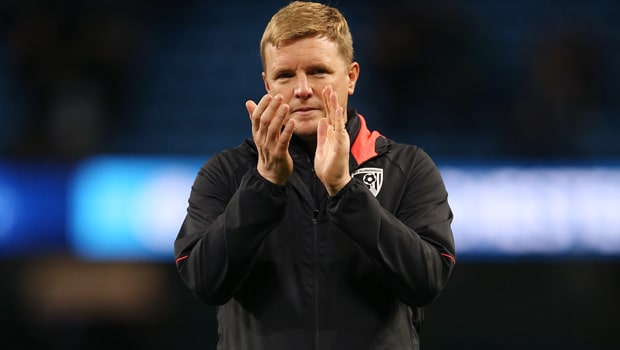 Bournemouth are desperate to get back on the pitch and put last weekend’s 4-0 defeat to Liverpool behind them, says boss Eddie Howe.

The Cherries were swept aside at the Vitality Stadium as Mohamed Salah netted a hat-trick, consigning Bournemouth to their joint heaviest defeat of the season and sending Jurgen Klopp’s men top of the table.

Bournemouth head to Wolves on Saturday and, while the Molineux men have won their last two games, Howe is eager for the game to come around.

“We want to get out there and put the Liverpool game to bed,” he said.

“Wolves have done well and have carried their form and playing style forward from the Championship.”

Just a point separates the teams, with Bournemouth in eighth ahead of Wolves in 10th spot, and Howe has hinted leading man Callum Wilson may come back into the side after missing the Liverpool defeat with minor hamstring concern.

Given the hectic couple of weeks looming up, Howe is treading carefully with the England goalscorer.

“We’re hoping he can play, but we know we have to be careful with these kind of injuries.”

With a League Cup quarter-final against Chelsea coming in midweek, plus further clashes with Brighton, Tottenham and Manchester United in the league before new year, Howe is acutely aware of how important the remainder of December may be.

“The Christmas period is a really important time for us. We know we can build some real momentum, and these periods can often define seasons,” he added.