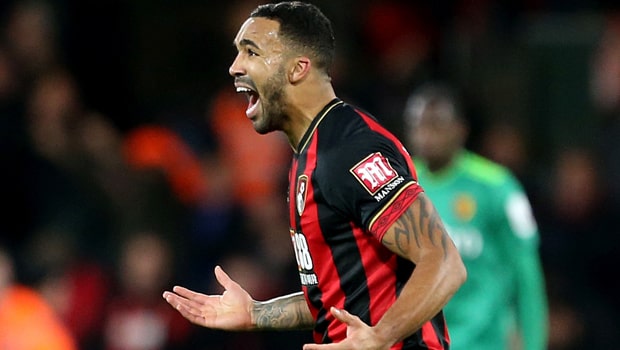 Bournemouth striker Callum Wilson would improve Chelsea if they can attract him to Stamford Bridge this month, according to Dion Dublin.

Front pair Alvaro Morata and Olivier Giroud have yet to sparkle this season for Chelsea, leaving Maurizio Sarri to toil with the idea of playing Eden Hazard further forward in his line-up at times.

The Blues are being linked with a move for 26-year-old Cherries forward Wilson, who has bagged an impressive nine Premier League goals already for Eddie Howe’s team this season.

According for ex-Aston Villa and Manchester United forward Dublin, signing the once-capped England striker would improve things for Chelsea.

“Wilson has all the attributes to make them a better side going forward, he is a more out-and-out forward than what they have at present,” he told BBC Sport.

“Morata seems to have a soft underbelly, he likes a tap-in but does not really like to go through the pain barrier to score goals.

“I do like Giroud, he is a very good centre-forward. He does not get the number that people expect but as a centre-forward, and as a team player, I have a lot of admiration for him.”

Morata has struggled under new boss Sarri this season and is being linked with a possible return to La Liga while former Arsenal man Giroud has proved something of a bit-part player since crossing London.

Wilson scored on his England debut against the USA last year and it is anticipated that Howe and Bournemouth will drive a hard bargain for their man, should he be to leave the south coast during this window.

Chelsea are 1.25 to beat Newcastle at Stamford Bridge on Saturday, while Bournemouth and Wilson are 4.50 to get victory over Everton at Goodison Park on Sunday.