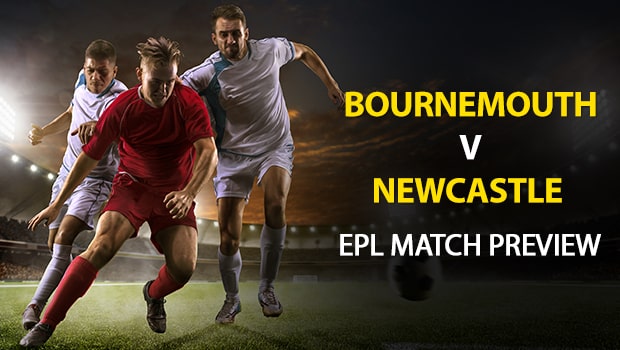 AFC Bournemouth and Newcastle United go head-to-head this weekend at Vitality Stadium. Both sides come in with some recent momentum.

Draw: There’s a 28.6 percent chance the match ends in a draw. There’s a draw in 25.8 percent of AccuScore sims, suggesting no added side value on the draw.

Last 5 Bournemouth are coming off a strong 2-0 win over Huddersfield Town last weekend, but that was their only win in their last five overall.

Building Momentum: In Newcastle’s recent 3-2 win over Everton, they got goals from Salomon Rondon and a pair from Ayoze Perez. It was an impressive effort after they fell down 0-2 early.

Head to Head: These two sides last met in Premier League action back in Nov. 2018 when Newcastle won, 2-1.

Miguel Almiron is projected to lead Newcastle with a 39 percent chance to score. He averages 3.11 shots per sim, 1.3 shots on goal per, and 0.49 goals per sim.

Callum Wilson is projected to lead Bournemouth with a 38 percent chance to score. He averages 2.07 shots overall, 0.87 shots on goal per and 0.48 goals per sim.

There’s a 53.5 percent chance that Newcastle either win or draw. That happens in close to 74 percent of AccuScore sims. Our sim data projects Newcastle to be much more competitive than offshore books are saying, with the side value going heavily to Newcastle. 3-star (out of four) AccuScore hot trend pick.