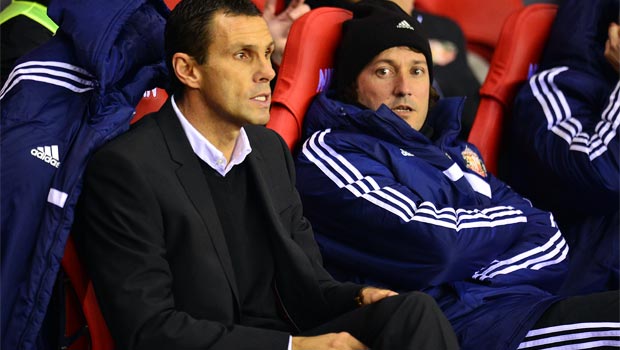 Sunderland manager Gus Poyet has set his players the challenge of doubling their points tally over the Christmas period, or risk being cut adrift at the foot of the Premier League.

Results last weekend went against the Black Cats as they lost at 2-1 at home to Tottenham, while fellow relegation rivals Crystal Palace and Fulham both won.

The Wearside outfit are currently on eight points, five points from safety heading into the busy festive period and Poyet has now outlined his hopes for the remainder of December.

The former Brighton boss believes Sunderland need to win three of their next five Premier League matches to keep their flagging hopes of beating the drop alive heading into January.

Traditionally the club who are bottom of the Premier League on Christmas Day are relegated and Poyet is hoping to avoid that by picking up maximum points in their next two matches against West Ham and Norwich.

“If you don’t share the urgency, you are not realistic. We are playing West Ham, Cardiff, Norwich [in three of their next four league games]. When are we going to win three? Now. It has to be now,” he said.

“On this weekend’s performance, we would not get enough points to stay up. If it doesn’t start today, this week, we have got a massive problem. Start means a win. Because everybody (the other teams in relegation trouble) wins somehow. We don’t.

“The idea is to double the points before January, so we have lost another opportunity against Spurs. There is nowhere to hide.

“There needs to be a moment when that is it, and there are no more excuses or bad luck. That is where we are hiding at the moment.”

Poyet went on to say that he is still planning to make changes to the squad when the January transfer window opens, although he claims he doesn’t know how many signings will be made in the New Year.