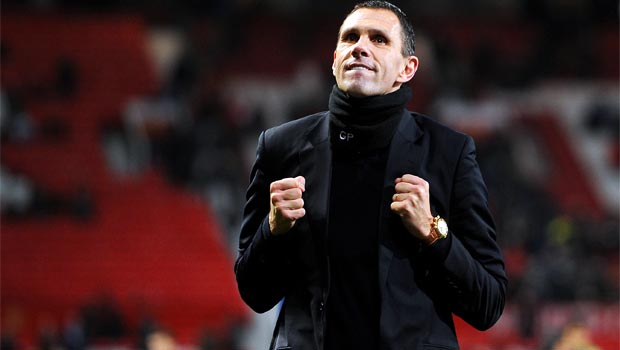 Sunderland boss Gus Poyet was quick to dedicate their dramatic Capital One Cup semi-final win over Manchester United to the club’s long-suffering supporters.

The Black Cats won the second leg 2-1 on penalties, after the match had ended 2-1 to United, leaving the tie level at 3-3 on aggregate.

Jonny Evans gave United the lead in the first-half with a header at the far post, before Phil Bardsley capitalised on a horrific mistake from David De Gea in extra-time. With Sunderland seemingly destined for a trip to Wembley, Javier Hernandez scored in stoppage time to send the match into penalties.

Seven penalties were missed, and Red Devils defender Rafael missed the crucial tenth spot-kick to send Sunderland through where they will face Manchester City in the Wembley final on 2 March.

Speaking after the match, Poyet was quick to pay tribute to the club’s fans.

He told Sky Sports: “My feelings are for them (the Sunderland fans).

“It’s been a difficult season, nothing to enjoy. They deserve that, so let’s see if we can go one better and win the final as well. This match was immense. This is the good thing with cups, you never know what is going to happen.

“Can we win it? Of course we can, why not? It will be an incredible task, hope they have a bad day and take our chances but the fans deserve this day.

“To have a day of football like this is great for everybody, great for football too. Let’s see if we can go one better.”

Sunderland are 5.70 to lift the trophy, with City the big favourites at odds of 1.13.