Portugal held by Republic of Ireland in Dublin 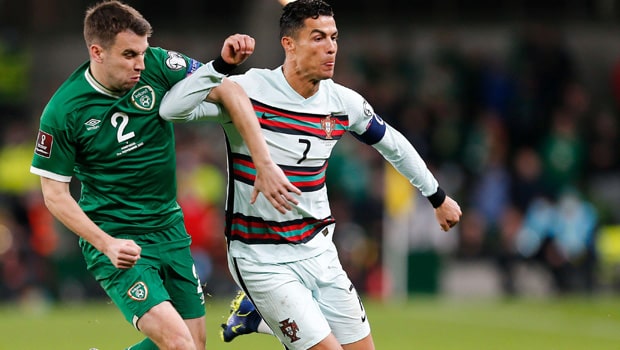 Ireland have succeeded in holding the top team, Portugal to a goalless draw.

In the match in which Portugal defender Pepe was given his marching order after catching Callum Robinson with a stray elbow, the hosta showed improvement in their performance.

This is seen as encouraging, especially restricting Cristiano Ronaldo to few chances.

Meanwhile, it was also a sub-par performance from Portugal as Ronaldo endured a frustrating night.

Ireland could have got goals as Chiedozie Ogbene and Enda Stevens spurned their best chances.

No doubt that Republic’s qualifying hope is already over, but Portugal are tied on 17 points with Serbia with one game left.

That makes it an interesting affair for both teams that want to secure a spot in the next works cup.

It could be recalled that Ireland almost secured a famous win in Faro in September before they were stopped by Ronaldo’s late double.

They went out for a win in front of a noisy 50,737-strong crowd inside the Aviva Stadium.

They further got a hope of a win after Pepe was sent off in the  82nd-minute for catching Callum Robinson with a stray elbow but they couldn’t take their chances.

Ireland had the ball in the back of the net in injury time, but the goals scored by Matt Doherty was cancelled after the referee ruled that Keane was fouled Rui Patricio in the build-up.

Now that the journey has ended for Ireland concerning the next world cup chances, the young team will be planning of blending further I’m subsequent games.

Meanwhile, it is a must-win for Portugal on Sunday with Manchester City pair Ruben Dias and Joao Cancelo and Liverpool’s Diogo Jota likely to return to the starting lineups.

As the table stands, Portugal shared the top with Serbia with 17 points respectively but they have a better goal difference.

A draw will be enough to earn them a World Cup place.