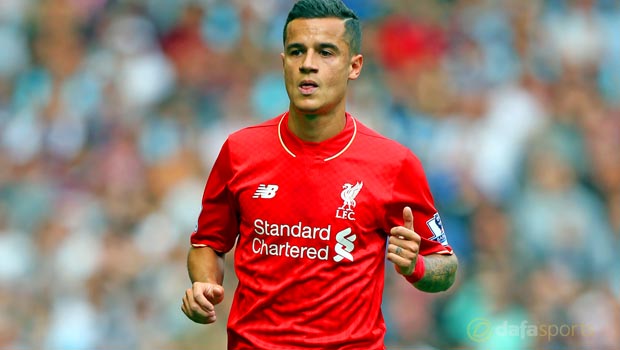 Philippe Coutinho’s agent says there is no truth to the reports suggesting the Brazilian wants to leave Liverpool and insists he has not spoken to Real Madrid about a move.

The speculation surrounding the 23-year-old has gone up a notch this week after Spanish newspaper Sport ran a front-page story claiming Barcelona will try to sign the playmaker when the January transfer window opens.

Reports of a bid from Barca followed hot on the heels of Coutinho’s international team-mate Neymar claiming he would like to see the Liverpool star at the Nou Camp.

Real Madrid have also been credited with an interest in the former Inter Milan youngster, with Coutinho’s agent Kia Joorabchian said to have spoken to Los Blancos about his client’s availability.

All the speculation over Coutinho’s future has come about despite the midfielder signing a new long-term contract with Liverpool in February.

Joorabchian has now moved to pour cool water on the reports linking Coutinho with a move to Spain, insisting he wants to remain at Anfield.

“Philippe is extremely happy at Liverpool. He signed a new long-term contract towards the end of last season that represents his ambition and his feeling for Liverpool,” he told the Brazilian TV channel Globo.

“Reports that I have been talking to Real Madrid about Philippe are not true. His aspirations are to qualify for the Champions League with Liverpool this season and to win a trophy. That is all that he is focused on – and nothing else.”

Whoever is appointed Liverpool boss will be desperate for Coutinho to stay on Merseyside given his importance to the team.

German Jurgen Klopp looks set to take over from Brendan Rodgers in the Anfield hot seat and should that be the case his first game in charge will be against Tottenham on October 17.