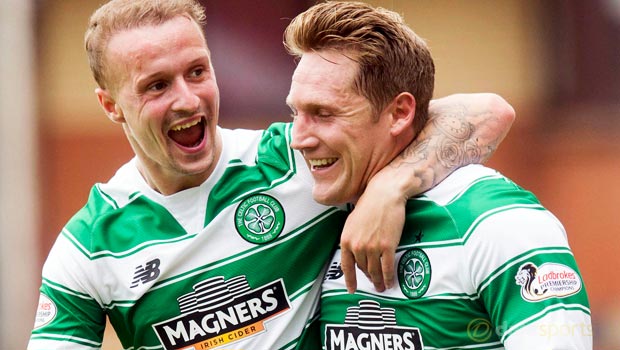 Celtic striker Leigh Griffiths says he would love to see his club-mate Kris Commons make himself available for Scotland again having once more been impressed by his form for the Hoops.

The Scots are currently gearing up for two crunch Euro 2016 qualifiers against Poland and Gibraltar knowing they need to take at least four points from the matches to keep their hopes of a first major tournament appearance in 18 years alive.

They go into the games without one of the Scottish Premiership’s top players to call upon in Commons, who retired from international football in 2013 to spend more time with his family and prolong his club career.

Griffiths believes that while Scotland have a strong midfield, they still miss the creative spark Commons can bring to a game.

The Celtic duo have linked up well for their club in the past and have also started the present season in good form as well.

Griffiths says that should the 32-year-old’s good performances continue then he could well be picking up the SPFA Player of the Year award for a second time in three years at the end of the season.

“Kris has bags of experience, he’s great to play alongside. He links the play really well and is not shy of a shot,” Griffiths told the Daily Record.

“A couple of seasons ago he scooped the lot with Player of the Year awards and rightly so, but he’s had to work hard to get back in the team and that ethic is why he’s still playing now.

“He could definitely win again but from a selfish point of view I want to win that award. Having Kris in your team, he’ll always create opportunities and chip in with a few as well.”

With Commons enjoying a short break during the international window, he should be well rested by the time Celtic resume their domestic campaign.

Meanwhile, the Bhoys’ next game in the Europa League sees them take on Molde in a game they are 2.50 to win, while their Norwegian opponents are 2.88 and the draw is 3.20.