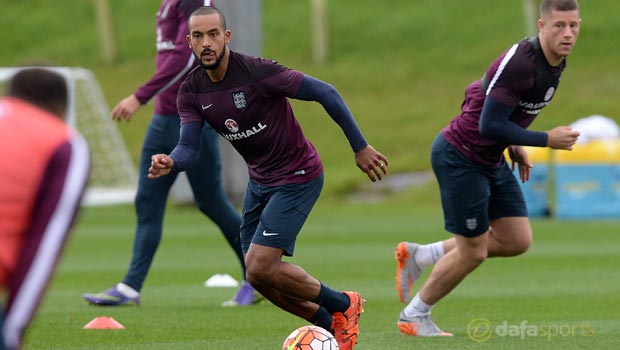 Theo Walcott hopes his form for Arsenal playing as a central striker will earn him a starting berth for England up front should Wayne Rooney fail to recover from an ankle injury.

Rooney is a major doubt for the upcoming Euro 2016 qualifiers against Estonia and Lithuania after missing the first two days of training with the Three Lions.

England have already qualified for next summer’s tournament in France and coach Roy Hodgson has already indicated he could pick an experimental side for their next two matches, with regulars like Rooney set to play a bit-part role even before he picked up his injury.

With Danny Welbeck unavailable with a knee injury and Daniel Sturridge left out of the squad, Walcott would appear to be in a fight with Tottenham’s Harry Kane to take the lone striker role in England’s line-up.

The 26-year-old has made that position his own at Arsenal this season, keeping Olivier Giroud on the bench, and he produced arguably his best performance of the campaign in the Gunners’ 3-0 win over Manchester United last weekend.

Walcott is now hoping he can show what he is capable of on the international stage by being included in the starting XI to face Estonia at Wembley on Friday.

“I know everyone would like to see me up front,” said Walcott. “Playing there for England, that’s what I want to do.”

Walcott puts his development as a striker down to the advice he has received from Thierry Henry recently, while he says a conversation with Gunners boss Arsene Wenger has helped him bring out the physical side of his game.

“It clicked about going up front when Arsene told me he wanted me to be more aggressive on the pitch,” Walcott added.

“I actually said: ‘Do you want me to start kicking people?’ That was my first reaction. He said: ‘No, I’m not saying that.’

“He wanted me to be more aggressive in terms of running at players, closing them down, tracking back, being there and in their faces.”

Walcott is 5.00 to be the first goalscorer in England’s clash with Estonia, while he is 2.05 to net anytime.