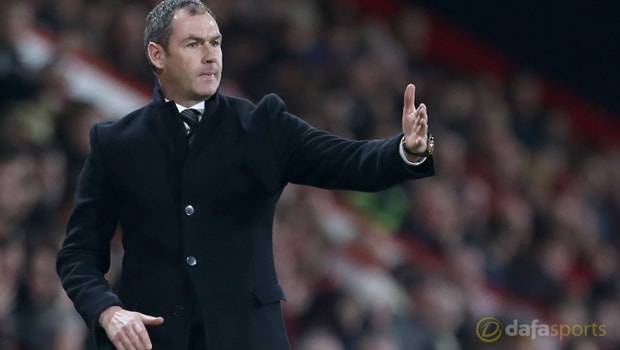 Gylfi Sigurdsson has praised the work Paul Clement has done since being appointed Swansea coach and has backed him to keep the club in the Premier League.

The Englishman became the Swans’ third manager of the season when he replaced Bob Bradley in January and has lifted them out of the bottom three courtesy of wins against Liverpool, Southampton, Leicester and Burnley.

However, two straight defeats have dropped them back into trouble but they will fancy themselves to bounce back when they welcome 19th place Middlesbrough to the Liberty Stadium on Sunday.

Sigurdsson carried his side at times during the opening part of the campaign and has clearly relished the extra freedom given to him courtesy of the improved organisation brought in by the coach.

Clement has worked at the likes of Chelsea, Paris Saint-Germain and Real Madrid during his career and left Bayern Munich, where he was Carlo Ancelotti’s assistant, to take up his post in Wales.

The Icelandic international admits he has been impressed by the coach’s methods and has backed him to continue improving the side.

“I’ve enjoyed Clement’s work an incredible amount,” he said. “You can see it on the training ground why Carlo Ancelotti took him with him wherever he went.

“He is a fun, has good sessions and has very strong relationships with the players.

He keeps the group happy, however, that the situation is not great. We were in a much worse position than before he entered. He is a great coach.”