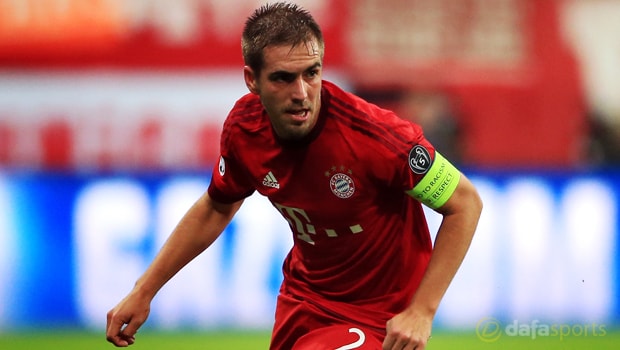 Bayern Munich captain Philipp Lahm has urged his side to lift their performances after Wednesday’s surprise 3-2 defeat to FC Rostov.

The Bavarians have struggled for consistency this season and despite taking the lead in Russia, lacked intensity throughout the match and in the end were made to pay, with the defeat meaning they can no longer top Champions League Group D.

With them also drawing against Hoffenheim before the international break, and losing on Saturday to Borussia Dortmund, their latest defeat has only sparked further talk of a crisis at the Allianz Arena.

Boss Carlo Ancelotti chose to rotate his troops for Wednesday’s game and the result will have done nothing to help further endear him to the Bayern faithful, with his players still seemingly adapting to his methods.

Saturday sees them face another tricky test when they host Bayer Leverkusen, a match Ancelotti’s men are 1.30 to win, with the draw 5.50 and Bayer 10.00.

In recent years Bayern have often been at their most dangerous when struggling for form and Lahm says they will be working hard in the next few days in a bid to put things right.

The captain admits they were poor during Wednesday’s defeat to Rostov and has demanded his side rediscover the edge that has made them so successful in recent years.

“We made far too many mistakes tonight against a side that is not exactly one of the top teams in the world,” Lahm said. “We gifted them the goals.

I don’t know why that is but we need to put it right as quickly as possible. “We need to change things and above all minimise the mistakes.

One of our greatest strengths in the last few years has been that we give opponents very few chances. That’s missing at the moment.”