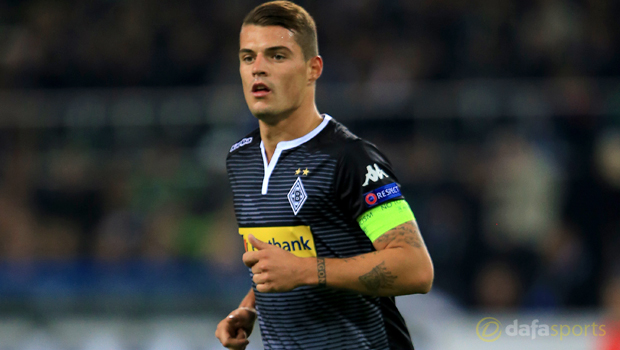 Per Mertesacker believes new arrival Granit Xhaka is the ‘perfect signing’ for Arsenal ahead of the new Premier League season.

The Swiss international signed for the Gunners in a deal worth more than £30m from Borussia Monchengladbach in May.

Having helped his country to the last-eight at Euro 2016, Xhaka will soon link up with his new team-mates in north London and Germany’s Mertesacker is expecting big things.

The central defender says he will do what he can to help Xhaka settle into his new surroundings.

“I don’t know him personally but that doesn’t matter, we will get along with each other very quickly because he is a good player and has done so much for Borussia Monchengladbach,” Mertesacker told Arsenal Player.

“He can speak German as well, so it will be joy to get his first year going and help him bed in as a player.”

Mertesacker went on to highlight some of the attributes that he believes will make the 23-year-old a success with Arsene Wenger’s team next season.

“He’s a leader and that is really important, especially in midfield.

He has got a very good attitude, is very composed on the ball and contributes a lot,” he said.

“He is a good passer as well, so he will set the tempo. I am looking forward to how he does it, how composed he will be in training and in the games. He will be the perfect signing for us.”

Arsenal eventually finished as runners-up to Leicester City last season, despite seemingly missing a great chance to end their long title drought, which now stretches beyond 12 years. The Gunners are 7.00 to win the Premier League next season.