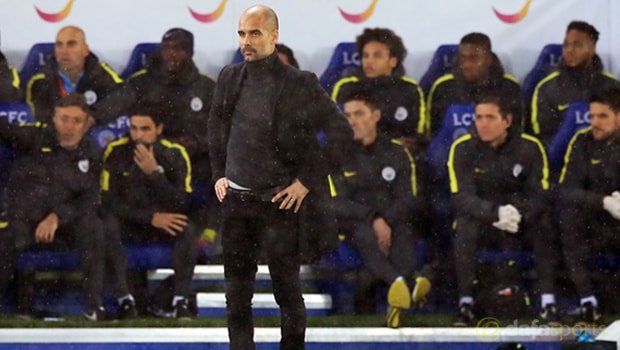 Pep Guardiola insists he won’t be coaching his Manchester City to improve their tackling in the wake of the 4-2 defeat to Leicester.

City did not win a single tackle in the opening 35 minutes at the Kingpower Stadium, as the champions raced into a three-goal lead – ably assisted by some stand-off defending from Guardiola’s side.

The manager says he will not be altering his footballing principles despite the loss, City’s third in 15 league games and second in succession after last week’s home defeat against Chelsea.

“I’m not a coach for the tackles, so I don’t train the tackles,” Guardiola told a news conference. “What I want is to try to play good, score goals, arrive more.

“What’s tackles? Yes, you have to win the duels, that’s true, but normally when you play good you win a lot of tackles.”

Vardy added his second after 20 minutes and completed his hat-trick after a slack passback from John Stones 12 minutes from full-time.

Aleksandar Kolarov and sub Nolito scored late goals for City. Despite their defensive lapses, Guardiola refused to be critical of his team.

“I don’t have complaints because I know when I analyse all the games we do very good things, but in the boxes the opponents arrive and they score a goal, and we don’t arrive,” he added.

Manchester City are 5.00 to win the title this season, while they are 1.20 to finish in the top four.