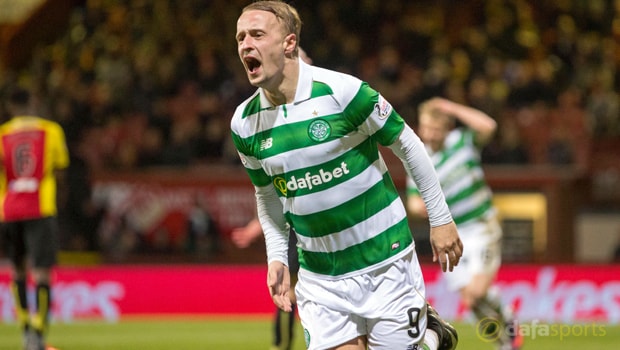 The Hoops striker conceded that may not have been the case last season under the watch of Ronny Deila.

Griffiths was handed a rare start on Friday as Celtic thumped Partick Thistle 4-1 at Firhill, the Scotland forward scoring one and setting up two more for midfielder Stuart Armstrong.

While Rodgers insisted afterwards that Griffiths is not guaranteed a start for Tuesday’s home game against Hamilton, last season’s 40-goal marksman is eager for the chance to feature on home soil.

“We look forward to Hamilton on Tuesday now, back on the home pitch and we want to make it count,” Griffiths told the Celtic website.

“Teams will come to Celtic Park now fearing the worst. That’s what we wanted at the start of the season.

Last season teams would come to Celtic Park thinking they could get a result, but now teams are going to be scared coming to Celtic Park with the way we’re playing and we just need to keep doing the exact same things.”

Celtic have won all seven domestic games played in Glasgow’s East End since Rodgers replaced Deila in the summer.

They have scored 27 goals in that run, while being breached on just three occasions.

According to Griffiths, it will be hard for any team in Scotland to end Celtic’s unbeaten run this season. “It’s going to be hard for teams to stop us.

There’s no doubt about that,” he added. “We’re getting more and more confident with every game the way we’re playing.”

“I’m not saying that we’re going to go the whole season unbeaten, we just need to take it each game as it comes.”