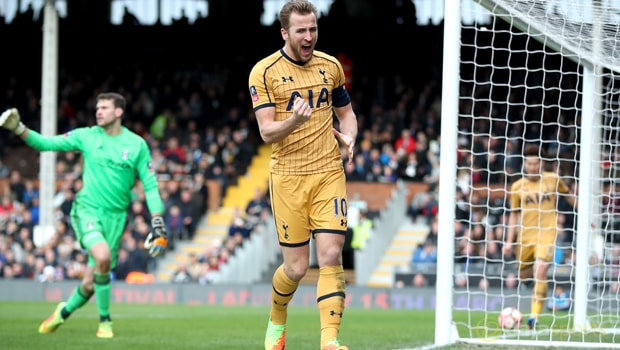 Harry Kane has allayed any fears that he is carrying an injury by insisting he want to play every game for Tottenham.

The England hitman was, for some, a surprise starter in Sunday’s FA Cup win over Fulham at Craven Cottage.

There were worries about Kane’s fitness after he limped out of Thursday night’s Europa League defeat against Gent.

However, Mauricio Pochettino included the 23-year-old in his strong starting team against Fulham and Kane duly delivered, scoring all three of Tottenham’s goals as they set up another London derby, this time at home to Millwall, in the quarter-finals.

Afterwards, Kane revealed he’d expected the manager to call him ashore before he sealed his second hat-trick of this calendar year and his fifth overall in a Spurs shirt.

“We played very well and probably should have had a few more goals.

I thought the manager was going to take me off soon but fortunately I was able to sneak the third one in,” he told the BBC. “I am fine. It was only a clash of knees, I want to play every game.”

Tottenham have another crucial cup encounter on Thursday evening when they face the Europa League last-32 second leg against Gent, trailing 1-0 after the first leg.

They may be just one game away from a Wembley semi-final appearance in the FA Cup, but Kane is eager to do his bit to improve Spurs’ recent record at the national stadium before that.

“Winning games gives you confidence so we are buzzing to go at Wembley on Thursday,” he added.

Tottenham are 4.50 to win the FA Cup this season while they are 1.30 to beat Gent on Thursday.