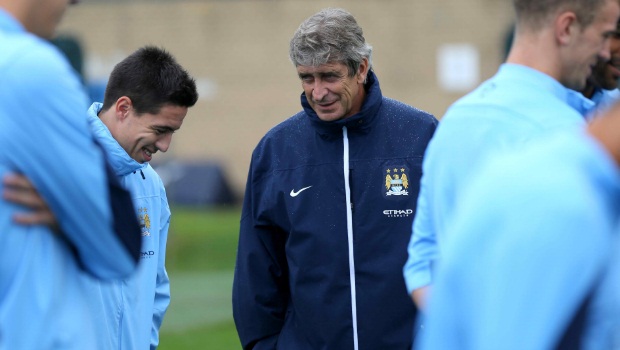 Manchester City manager Manuel Pellegrini has insisted that all of his strikers are on an equal footing at the club.

New signings Alvaro Negredo and StevanJovetic are set to compete with Sergio Aguero and EdinDzeko for places in the front line, with City’s first Champions League match of the season against Viktoria Plzen set to take place next week.

The four players cost £107million between them and Pellegrini has admitted he has no idea which pairing will be the most effective for City this season.

However, he has said that all players will be given the chance to prove their worth.

Dzeko and Aguero have been the preferred pairing so far, but with City now having seven games in the next 21 days, Pellegrini knows that he may have to rotate the selection in order to keep things fresh.

“Alvaro Negredo is always a very important option, EdinDzeko is exactly the same,” he said.

“They are different players but they are both very good players, so the important thing is how useful both are for the team.

“They have competition always for a place but they can play together also, so they are two important players for the team.

“We have to play seven games in 21 days, so the most important thing is not the 11 that start, but the performance of each player in every game.”