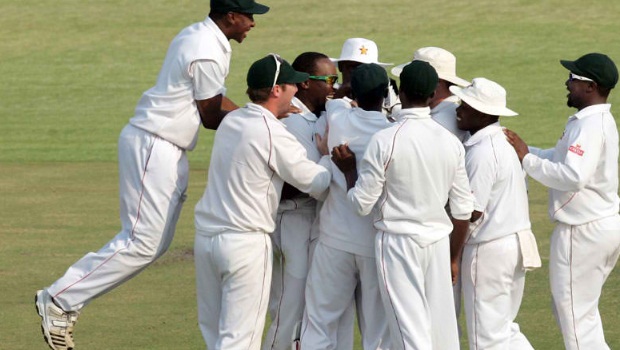 Zimbabwe have secured a famous Test victory by beating Pakistan by 24 runs in Harare.

The win is Zimbabwe’s first over a side other than Bangladesh since they beat India 12 years ago, while it is only their 11th success since they were admitted to Test cricket in 1992.

The win, their first Test success against Pakistan since 1998, means the two sides draw the series 1-1.

Beginning the fifth day on 158-5, the tourists needed to score 264 to wrap up a 2-0 series win. However, despite the best efforts of Pakistan captain Misbah-ul-Haq, who made 79 not out, he soon ran out of batting partners as his side was dismissed for 239.

This gave the home side a 24-run victory after they had scored 294 and 199 in their two innings. Pakistan had racked up 230 in their first.

Wicketkeeper Adnan Akmal was the first to go on the fifth day for 20 before Abdur Rehman, Saeed Ajmal and Junaid Khan combined with Misbah to push the visitors on to 238-8. This meant they needed just 26 runs from two wickets.

However, seamer Tendai Chatara struck to get Junaid caught at gully for one, picking up his fifth wicket in the process. Figures of 5-61 allowed Chatara to pick up the man-of-the-match award.

Last man Rahat Ali secured a single from his first ball, but was run out off the next delivery after a mix-up with Misbah, allowing Zimbabwe to claim their historic victory and a series draw.