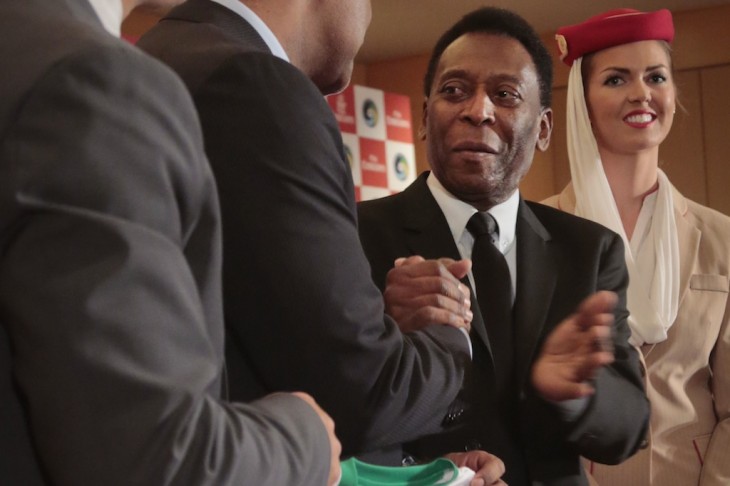 Football icon Pele is convinced that Brazil can win the 2014 Fifa World Cup on home soil.

Three-time competition winner and football icon Pele is convinced Brazil can carry the hopes of a nation and win the 2014 Fifa World Cup on home soil.

No other country shoulders the burden of expectation quite like five-time winners Brazil and the chance to deliver in front of their own supporters has ramped up the pressure on Luiz Felipe Scolari’s men.

Brazil fans with long memories only need to go back to 1950 to know what such a level of anticipation can do to a team.

Then, a deathly silence descended on the original and spectacular Maracana as South American neighbours Uruguay stunned the hosts in the final.

Such was the home side’s confidence, legend has it that the front-page headline in Sao Paulo’s Gazeta Esportiva before the match read “Tomorrow we will beat Uruguay!” and the then mayor of Rio proclaimed Brazil world champions prior to kick-off.

This time around Brazil are aiming to win the Jules Rimet Cup for the first time since 2002 and face strong challenges from the likes of holders Spain, South American rivals Argentina and emerging force Germany.

Observers have questioned whether the current squad boasts the superstars of yesteryear, given that Neymar, Oscar and Lucas Moura are in the embryonic stages of their careers.

Pele, 72, is in no doubt Brazil can challenge and urged supporters to keep faith with Scolari.

“I think Brazil has an excellent opportunity to be in the final of the World Cup. To win is tough because football always brings a lot of surprises,” he said.

“Brazil has some great players and we have discussed in Brazil that we had almost three years with the same coach – Mano Menezes.

“Unfortunately these three years we did not have a base. One month with Luiz Felipe Scolari and it has changed.”

Brazil play a friendly against France on June 9 in advance of the Confederations Cup, which starts for Scolari’s men on June 15 against Japan.