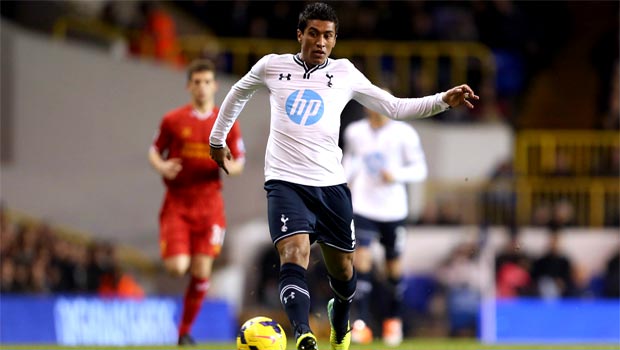 Tottenham midfielder Paulinho is set to spend at least a month on the sidelines after scans revealed “significant ligament damage” to his ankle.

The Brazilian was forced off in his side’s 3-0 win over Stoke on Sunday following a strong tackle by midfielder Charlie Adam.

The former Corinthians player will miss the big FA Cup clash against Arsenal on January 4th, as well as the New Year’s Day trip to Manchester United. He may also miss the Premier League games against Crystal Palace, Swansea and Manchester City, and the news will come as a big blow to Spurs boss Tim Sherwood.

A statement on Tottenham’s official website read: “Following a MRI scan, the club can confirm that Paulinho has sustained significant ligament damage to his right ankle after a heavy challenge from Charlie Adam during Sunday’s win against Stoke City.

“The Brazil international was forced off as a result of the injury and is expected to be sidelined for at least four weeks.”

Tottenham are reportedly looking to make a formal complaint against Adam, who has been involved in a number of incidents against the club. He has previously clashed with Gareth Bale and Scott Parker during his time at Blackpool and Liverpool.

However, the 28-year-old has quickly denied any vendetta against Spurs.

“Just for the record and to the people tweeting me abuse saying so, I don’t and never have had anything against @SpursOfficial,” he wrote on his official Twitter page.

“And I would never intend to injure a fellow professional.”