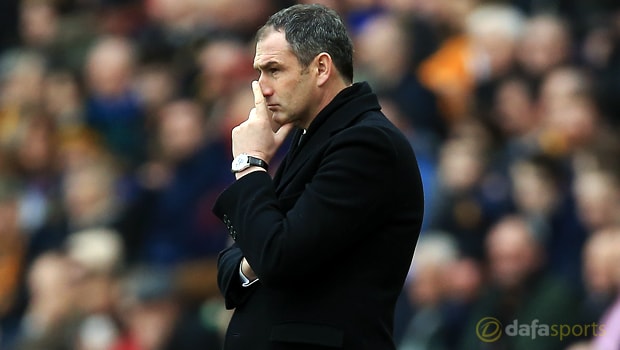 Swansea travelled to the KCOM Stadium on the back of a last-gasp 3-2 win over Burnley and another victory would have put the Welsh outfit eight points clear of the drop zone.

However, two goals from Tigers substitute Oumar Niasse, who joined on loan from Everton in January, were enough to decide the contest, despite a late goal from the visitors’ defender Alfie Mawson.

That result has lifted Hull to 18th place in the table, one point behind Crystal Palace in 17th and just three adrift of the Swans, who stay in 16th position.

Clement’s men are once again looking over their shoulders and the former Bayern Munich assistant has warned his players they risk going down if their focus drops again.

Swansea return to action on Saturday when they travel to Bournemouth, who eased their relegation fears with a 3-2 win over West Ham, and the English tactician wants a response.

“We’re nowhere near safe and we’ve got a lot of work to do,” he said. “There’s still a lot of football to be played.

We’ve 10 games to go, we’ve got to start playing well again and we’ve got to bounce back next time against Bournemouth.”

The Cherries are favourites to pick up the win at 2.30, a share of the spoils is on offer at 3.30 while the visitors are priced at 3.00 to clinch all three points.

A win for the Swans would put them level on points with Bournemouth whilst Eddie Howe’s men could potentially leapfrog the Hammers into 11th place.