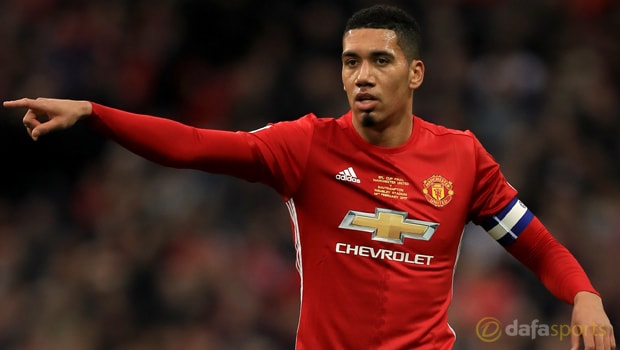 England international Chris Smalling has challenged Manchester United to make history this season and successfully defend the FA Cup for the first time in the club’s history.

United have already won the EFL Cup this term, beating Southampton 3-2 in the final, and the Red Devils are just one victory away from making a second trip to Wembley.

Jose Mourinho’s men take on Premier League leaders Chelsea at Stamford Bridge in the FA Cup quarter-finals on Monday and both teams will be confident of progressing.

Both sides are on a 10-game unbeaten run across all competitions although the Blues could have the slight mental edge going into the contest.

Antonio Conte’s side thrashed United 4-0 on home soil in the previous meeting back in October and the hosts have not lost to their rivals in the last 11 encounters.

However, the 20-time English champions have a great history in the FA, having won the competition a joint-record 12 times, and they will be hoping to move out in front with 13 titles.

Smalling, who has struggled with injuries this term, is hoping his side can get the business done on Monday and keep their bid for history going.

“The FA Cup is a tough trophy to defend and looking at previous records, not many people have been able to do it and I know United haven’t,” he told MUTV.

“So to be a part of history by retaining the Cup would be brilliant.

“We’re in the quarter-finals already and we can see the finishing line is not too far away if we play as well as we can.”