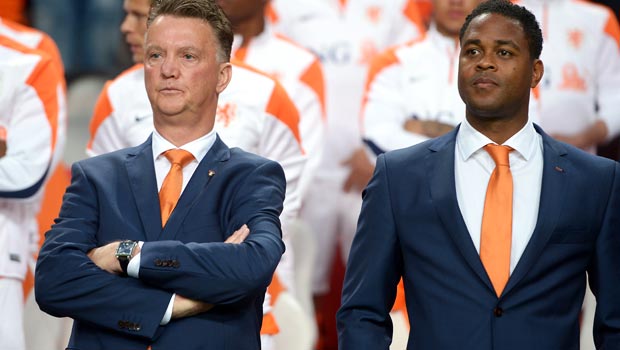 Patrick Kluivert has revealed he would relish the opportunity to work alongside Louis van Gaal in a coaching capacity at Manchester United following their success on the international stage.

Kluivert worked as Van Gaal’s assistant for two years as Holland qualified for the World Cup and then claimed a third-place finish.

The Oranje shocked many with their impressive opening win over defending champions Spain, coming away with a 5-1 victory.
However, the European outfit fell at the final hurdle and failed to reach the final after losing on penalties to beaten finalists Argentina.

The 38-year-old has previously played under Van Gaal at Barcelona and Ajax – and now insists he would love the chance to make up part of his coaching staff at Old Trafford.

Van Gaal started his new role as the Red Devils boss on Wednesday but had previously revealed that Ryan Giggs would be kept on as his number two.

Despite Giggs being handed the assistant’s job, Kluivert is still hoping that there may be a role for him at some point.
Kluivert said: “I’m fine with it.

“I would have loved to come to Manchester United. I hope it can happen in the future, you never know.”

The former Holland international believes that the 62-year-old will be aiming to reclaim the Premier League title in his first campaign as United to forget the disappointment of last season.

He added: “He’s absolutely going for the Premier League title. A club like Manchester United always has to go for the title and that’s what he wants in his first year.

“He’s a great coach and I know he’s looking forward to taking over at Manchester United.”

United can be backed at 1.39 to win when they kick off their league campaign against Swansea who are available at 6.73 to win at Old Trafford.