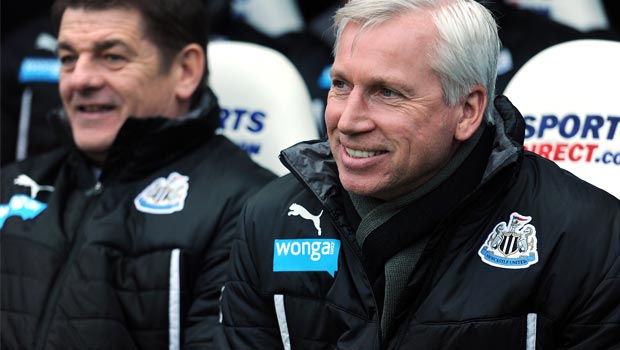 Alan Pardew admits that things are good at Newcastle at the moment but has played down talk of securing European football next season.

The Magpies are currently sixth in the Premier League standings, with 23 points from 13 games played, and they travel to Swansea on Wednesday night looking for a fifth straight top-flight victory.

It seemed unlikely that the north-east club would be in their present position after a tricky start to the campaign which saw them lose three of their first six games, but wins over Chelsea, Spurs, Norwich and West Ham have seen them move to within one point of the Champions League places.

Newcastle played in last season’s Europa League after a superb domestic run in the 2011-12 campaign, and it clearly affected their league form as they struggled to fight on two fronts.

But, despite not allowing himself to contemplate life back in Europe at this stage of the season, 52-year-old Pardew admits that it will already be on the fans’ minds.

“I am not even going to think about it at this stage,” he said. “But this is Newcastle, we like to raise our expectations way beyond the realism of where we are at times.”

The Toon Army will be eyeing another three points against Michael Laudrup’s misfiring Swans, who have won just one league game from five attempts, and Pardew admits there is now a happier atmosphere at the club with the way his side is playing.

“It’s great at the moment,” he added. “Our fans must be enjoying it – I hope they are because I think the team is playing with a commitment and a style that’s good.”