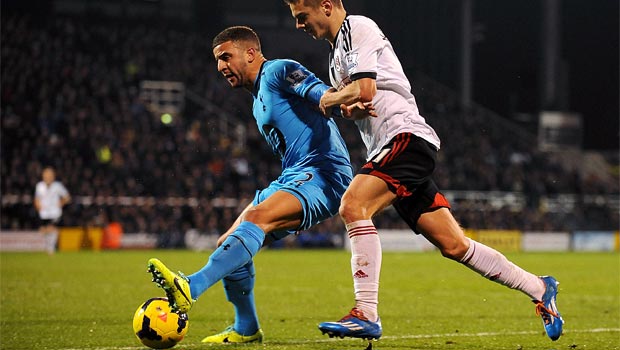 Defender Kyle Walker admits Tottenham will have revenge on their mind when they travel to take on Fulham on Wednesday night.

Spurs looked on course to qualify for this season’s Champions League during the first half of last season before a dip in form saw them finish outside the top four.

Defeat to the Cottagers at White Hart Lane was one of the body blows to the north Londoners’ hopes of playing in Europe’s elite club competition, with Dimitar Berbatov netting against his old club back in March to seal the points for Fulham.

The two sides will now meet at Craven Cottage with nine places and 11 points separating them, with Spurs in ninth spot after a steady, if unspectacular, start to the campaign.

Fulham have struggled to date, with Rene Meulensteen now in charge of first-team affairs following Martin Jol’s departure, and they welcome Spurs to west London in 18th place in the standings after five straight Premier League losses.

It all points to another tough night for the hosts down by the River Thames and Walker confessed that there will be an extra incentive for his team-mates.

“Last season when Fulham came to White Hart Lane they beat us, so we owe them something for that,” he said.

“I don’t like losing any game, but I think that game was the turning point last season.”

Spurs themselves have been under a bit of pressure as they have not won in four top-flight outings, but Andre Villas-Boas has a talented squad at his disposal and, if they do manage to gel, there is every chance they will go one better than last season.