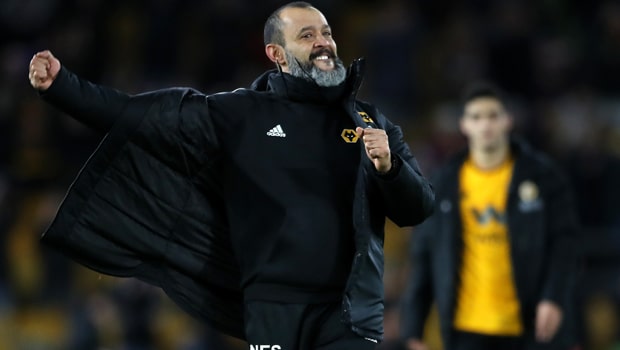 Wolves manager Nuno Espirito Santo has called on his squad to build momentum from Monday’s FA Cup victory over Liverpool.

The West Midlands outfit sealed a 2-1 victory at Molineux over a much-changed Liverpool to book their place in round four of the competition.

Raul Jimenez put Wolves ahead before half-time before Ruben Neves netted the winner 10 minutes into the second period after Divock Origi had equalised.

They will travel to either Shrewsbury or Stoke in round four as the Premier League outfit look to enjoy a run deep into the competition.

Nuno was delighted to see his men put in a strong performance as they sent Liverpool packing from the FA Cup for the second time in three years.

“It was a very important moment for us and the fans. We’d just lost a goal and to react with such a beautiful goal, Molineux came alive again,” Nuno said.

“It was a good performance, it was a tough game. We were organised and had good counter-attacks.

“In the second half the reaction was important, but almost immediately we got back on the front foot so, in general, it was a very good performance.”

Wolves don’t appear to have any concerns about a potential relegation battle this term as they currently sit ninth in the Premier League.

Nuno has challenged his men to build on Monday’s victory when they face champions Manchester City on Monday.

He added: “We go game after game, now we have Manchester City and we’ve done well against them in the past.”

Wolves can be backed at 15.00 to win at the Etihad Stadium, while City are priced at 1.20 to take all three points, with the draw available at 6.50.