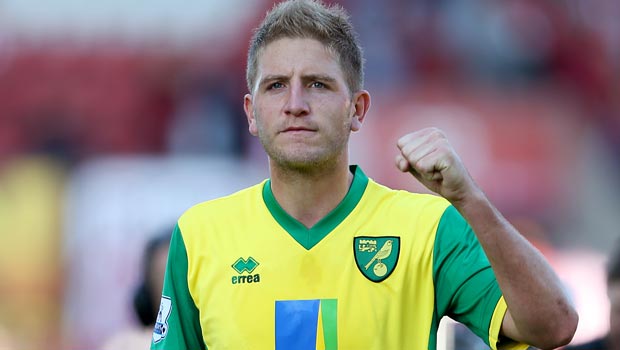 Norwich defender Michael Turner admits his side need a “miracle” if they are to avoid relegation.

The Canaries picked up an unlikely point at Chelsea on Sunday but the result came as a disappointment to both sides, as the Blues’ title hopes are now all but over.

Norwich remain in the bottom three and their relegation may have been confirmed before they host Arsenal in the final round of fixtures.

Sunderland are two points clear of Norwich and West Brom are a point better off, and the two teams immediately above Norwich meet at the Stadium of Light on Wednesday.

A draw between Norwich’s two relegation rivals in their game in hand would all but relegate the Canaries as West Brom would move four points clear of danger and Sunderland would be three ahead of the Carrow Road side with a vastly superior goal difference.

Turner now admits Norwich need luck on their side and a “miracle” to avoid the drop, as the Canaries are essentially relying on Sunderland losing both of their home games against West Brom and Swansea if they are to have any chance of avoiding the drop.

“We will work hard this week in training with our fingers crossed, and hopefully we can pull off a miracle,” he told the Eastern Daily Press.

“Anything can happen so we’ve just got to focus on ourselves and go for the three points next week (at home to Arsenal). Obviously we need Sunderland to lose in midweek (against West Brom) and then lose at the weekend (against Swansea) and we need to win, so that’s it.

“I think we came here (Chelsea) to do exactly what we have done, sit back and wait for the half chances to come along. We were hoping for a little bit of luck to maybe put one away, but it just wasn’t to be.”