No room at the inn for Henrikh Mkhitaryan 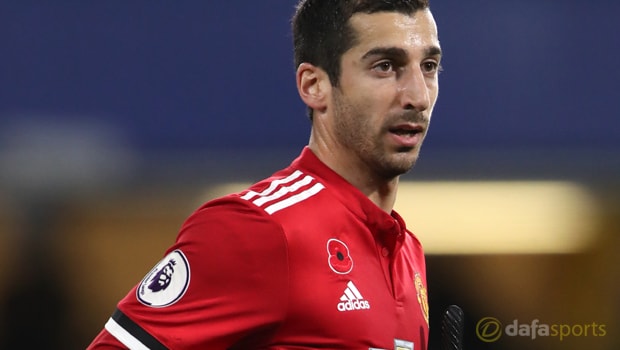 Manchester United boss Jose Mourinho says Henrikh Mkhitaryan has been left in the cold recently because there is no room in an 18-man squad for him.

The Armenian playmaker has failed to make Mourinho’s 18-man panel for seven of United’s last eight games, with his only involvement coming as a substitute in last month’s Premier League clash with Brighton at Old Trafford. Mkhitaryan did not make the desired impact under Mourinho last season although he began this term in better form and found favour with his boss.

Mourinho now says there is no room, even on the bench, with others more deserving of inclusion than the 28-year-old former Borussia Dortmund man.

Mkhitaryan was again absent for the midweek win over Bournemouth at Old Trafford – despite Paul Pogba being suspended – and the Red Devils chief was happy to explain his rationale.

“I can only have six [outfield] players on the bench and I try to have some balance on the bench,” Mourinho said in a press conference ahead of Sunday’s game against West Brom.

“[Against Bournemouth] I had two defenders and [Daley] Blind who can play in different areas. I had Ashley Young to cover all of the wing and the wing-back position.

“I had [Ander] Herrera as a midfield player, Zlatan [Ibrahimovic] as a striker and Marcus [Rashford] as a second striker and winger. “I played [Anthony] Martial, [Juan] Mata and [Jesse] Lingard in the team.

To have Micki (Mkhitaryan) means that I don’t have one of them and, in this moment, I believe the other ones they deserve [the chance to play].”