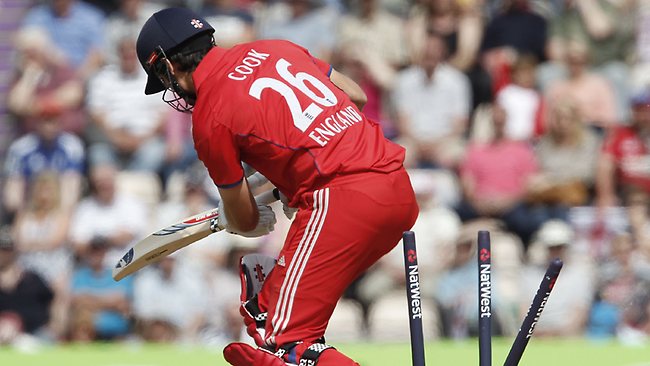 England’s preparations for the upcoming ICC Champions Trophy have taken a hit.

And not just by the hammerings meted out by New Zealand in the last two one-day internationals.

The host nation had been installed as one of the market leaders in the outright betting for the last ever Champions Trophy but there will be quite a few worried supporters going into the competition, which gets underway on Wednesday.

Ashley Giles’ men suffered a five-wicket defeat in the opening game of the series against New Zealand on Friday before they were put to the sword on Sunday, enduring an 86-run loss, largely thanks to the Black Caps’ destruction of what is looking like a very ordinary bowling line-up.

Some will point to the fact that England were missing key players as the likes of Jade Dernbach and Chris Woakes were given some real treatment by Martin Guptill and company, but the injury news is not good regarding England’s front-line bowlers.

Stuart Broad and Steven Finn have missed the first two games against New Zealand through knee and shin injuries respectively and, although they may yet prove their fitness, both are a doubt for the final warm-up game in what is now a dead rubber at Trent Bridge on Wednesday.

“They are both a concern but five or six days is still quite a long way away,” captain Alastair Cook said. “They’ve missed two games and been out for a while, so we’ll see.”

Cook has tried to play down the potential absence of two of his best bowlers and insists it would be a ‘disservice’ to suggest that the other players could not go on and win the Champions Trophy.

However, he has admitted that the manner of the back-to-back defeats has forced the England camp to take a look at the make-up of the squad as they go in to the tournament.

England have been drawn in Group A and open their campaign against old enemy Australia at Edgbaston on Saturday, before facing Sri Lanka next Thursday and finishing the group stage against New Zealand on June 16.