Next two games so important for Yaya Toure 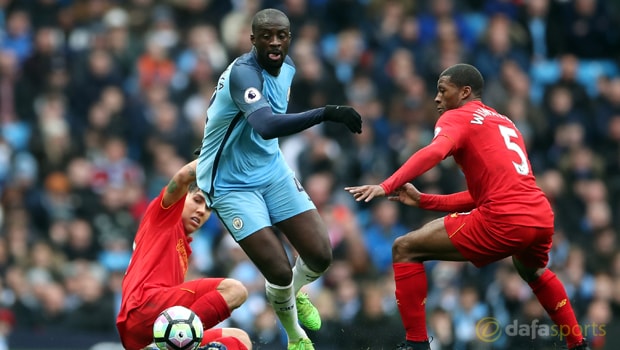 Yaya Toure says Manchester City’s next two fixtures against Arsenal and Chelsea could define their season.

The Citizens battled to a 1-1 draw with Liverpool on Sunday and boss Pep Guardiola will be using the international break to focus on his plans for their next outing with the Gunners on April 2, before a trip to Stamford Bridge the following Wednesday.

Much has been made of City’s failure to challenge the Blues for the Premier League title and having crashed out of the Champions League, it means another summer of transfer activity is expected, with Toure one of those set to depart.

However, having been one of the first big names to arrive at the club when he signed in 2010, the Ivorian is keen to ensure he does not go out with a whimper.

With the games against Arsenal and Chelsea on the horizon, he has urged his third-placed side, who are 1.17 for the top four, to concentrate on doing all they can to in their next couple outings to help achieve their goal.

“Arsenal and Chelsea are tough games, but we have the chance to come a little bit closer to the top,” Toure told the Mirror.

“If we can get points there, it will be brilliant. “It’s all about the next two weeks.

All that’s important now is finishing the season strongly – finishing in the top four – giving the Champions League to the fans again.

“We’ve been very strong away. We have more space and we’re delighted to play in big stadiums because we have the space to play.

We hope we can take all six points, because this league is so difficult.”