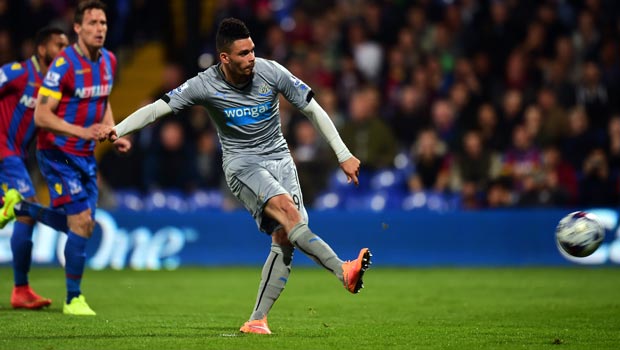 Newcastle United manager Alan Pardew says he is ‘delighted’ for Emmanuel Riviere after the striker opened his account for the Magpies in the 3-2 League Cup victory over Crystal Palace on Wednesday.

The Frenchman, who moved to the Premier League in the summer from Monaco, has struggled in front of goal and has already started to receive some criticism from the Geordie faithful.

Riviere has found it tough to adapt to the English style of the game and the inability to find the back of the net has seen Newcastle drop to the bottom of the league table.

Events may be on the turn for the Magpies though after they secured an extra-time victory over Crystal Palace in the league cup on Wednesday, with Riviere scoring a brace.

A collected finish, along with a well-taken penalty, look to have provided the striker with a much-needed confidence boost and Pardew said he was delighted for the Frenchman who has been working very hard in training.

“I’m so pleased for Manu. He’s worked tirelessly for the team without getting a goal, so that will be a massive lift for him.”

The game looked to be going to penalties as the two sides were locked at 2-2, with Newcastle a man down having had Mehdi Abeid sent off for two bookable offences, but local lad Paul Dummett popped up with a great header to send the Magpies into the fourth round.

They will now face Manchester City at the next stage after the Citizens thrashed Sheffield Wednesday 7-0 at the Etihad after a blistering second-half performance.

Newcastle are back in Premier League action on Monday when they face an away trip to Stoke, and the visitors are 3.38 to pick up the win, with the home side favourites at 2.08.