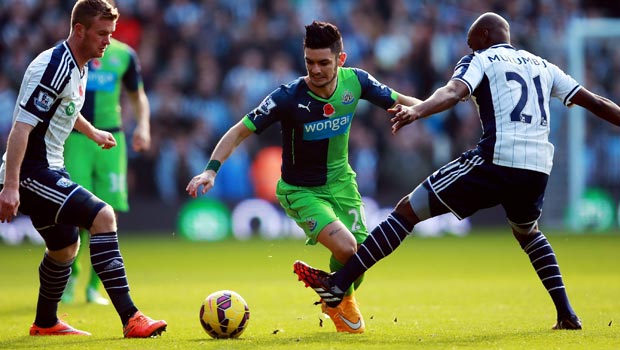 Newcastle manager Alan Pardew has warned summer signing Remy Cabella he will have to toughen up if he is to become a success in England.

The French international joined from Marseille and started in Newcastle’s first six league games but has found himself restricted to the subs bench in recent weeks.

That has coincided with Newcastle’s resurgence and after four wins in a row in all competitions they should be full of confidence heading to West Brom on Sunday.

The Magpies are on offer at 3.16 to continue their winning ways at the expense of 2.25 favourites West Brom with the draw at 3.24.

Pardew believes Cabella has got to learn to adapt to his new surroundings.

“He goes down and he thinks some of the challenges in this division should be fouls. He genuinely believes that – but they’re not,” the Newcastle boss said.

Despite that, his manager has been more than pleased with 24-year-old’s contribution as a substitute during his side’s winning run.

“I think he’s beginning to get the intensity of the division. The cameos he’s done have been significant – Spurs, Liverpool, they were significant.”

Pardew was under intense scrutiny just a few short weeks ago as Newcastle desperately struggled to get points on the board.

A hat-trick of league victories, including a 1-0 win over Liverpool last time out, has lifted them into 12th spot and they could climb into the top half with victory at the Hawthorns.

And now Cabella is getting ever closer to regaining his starting spot according to his manager.

“He’s on the cusp of starting again now as he comes to grips with what this division’s about,” Pardew added.