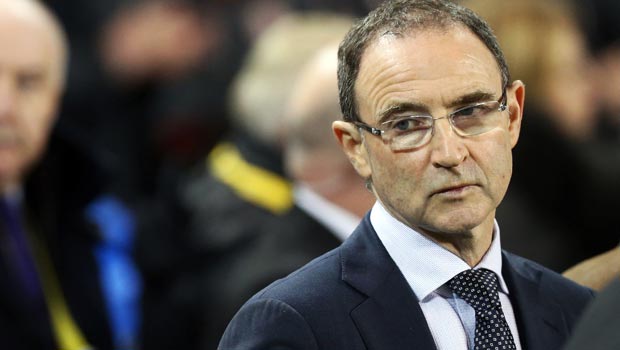 Martin O’Neill has no intention of pleading with Stephen Ireland to return to international football after he failed to return his calls ahead of the Republic of Ireland’s summer friendlies.

O’Neill phoned Ireland, who has been in self-imposed exile for seven years, before he picked his squad for four friendly matches that kick off with the visit of Turkey to the Aviva Stadium on Sunday.

“The door remains open,” said the Irish manager. “But I won’t go begging to him.”

O’Neill was told, via Ireland’s agent, that he would not be making himself available for the upcoming internationals against Turkey, Italy, Costa Rica and Portugal.

“The order of events was as follows,” said O’Neill yesterday. “I had a meeting with a couple of the Stoke City players a few weeks ago but deliberately didn’t want to speak to Stephen in that group.

“I wanted to have that type of conversation with him on a one-on-one basis.

“So I called him to get something organised. There was no answer, which was fine because I’m not always immediately responsive myself to phone calls.”

At the same time, the FAI were trying to make contact with the Stoke City midfielder, who enjoyed a fine finish to the season as his club climbed to ninth place in the Premier League.

Eventually the former Manchester City player’s agent called the FAI to say that Ireland would like to be considered but would like a conversation with O’Neill sometime in July.

“Following on from what Mark Hughes had said in a newspaper interview, I thought it was very obvious then that Stephen didn’t want to be involved in these games,” added O’Neill.

“If he phones me some time in July, of course I’ll speak to him then. But he has to make the call – not me. It really is as simple as that.”

Ireland’s international career has been on hold since the night in 2007 when he told his Irish team-mates he had to travel home and miss an important European championship qualifier against the Czech Republic because he was grieving for his grandmother, who he claimed had passed away that day.

When it emerged that she was not dead, Ireland altered his story and ‘killed off’ another grandmother, but she too was found alive and well. Embarrassed by the nature of his lies, Ireland subsequently retired from international football.