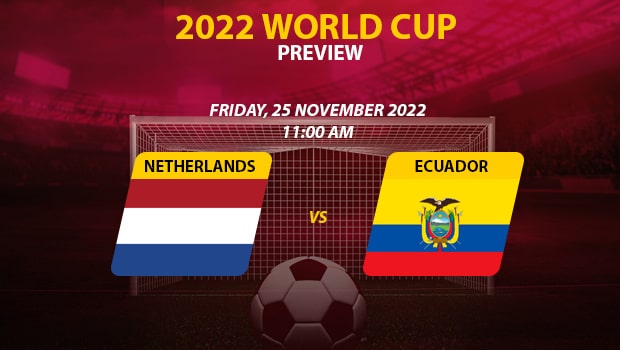 Ecuador looks to keep rolling when they collide with Netherlands in 2022 FIFA World Cup Group A action on Friday.

Ecuador is coming off an impressive 2-0 win in the World Cup opener against Qatar on Sunday and the final score didn’t reflect their superiority. Ecuador took a 2-0 lead in the first half thanks to two goals from Enner Valencia and they dominated the entire game but took their foot off the gas in the second half of a game they could have won by more goals.

Netherlands beat Senegal 2-0 on Monday after a Cody Gakpo header with just over six minutes to play and a Davy Klaassen goal in the 99th minute. It was hard-fought game from start to finish and Senegal pressured Netherlands and had many chances to score, but they just couldn’t find the back of the net.

Head-to-Head: These two teams last met in an international friendly on May 17, 2014 and the game ended in a 1-1 draw.

Netherlands didn’t play well against Senegal, but they still got the job done. Ecuador has a lot of talent and it won’t be easy but I Netherlands playing up to the level of the opponent and performing a lot better in a game that could decide first place in Group A.
Netherlands 1.70

Two-star (out of four) AccuScore hot trend pick on Netherlands in this one. Average score in simulations is Netherlands 2.63 to Ecuador 0.36.