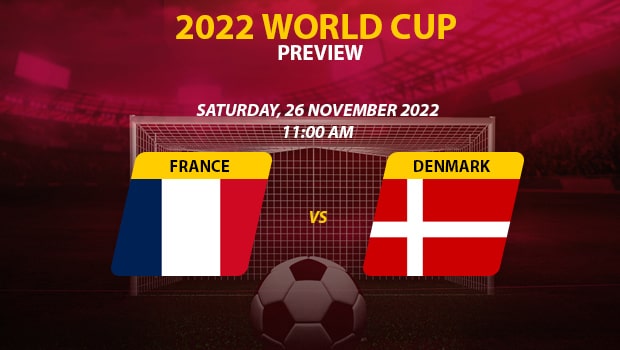 France looks to keep rolling when they collide with Denmark in 2022 FIFA World Cup Group D action on Saturday.

Australia took a 1-0 lead against France, but the defending World Champions proved to be too much for them as the game progressed and they won 4-1 on Tuesday.

Denmark is coming off a surprising 0-0 draw against Tunisia on Tuesday. On paper, Denmark was the better team and should have taken care of business, but Tunisia put up a fight and played a very smart game, coming with away with a valuable point.

For Denmark, Christian Eriksen has a 16 percent chance to net the ball. He averages 1.02 shots overall per sim, 0.49 shots on goal per and 0.17 goals per sim.

France didn’t play a perfect game against Australia and they still won 4-1. Denmark has a talented team that plays with chemistry and they already beat France two months ago but what I saw from them against Tunisia concerned me and France is on a completely different level.

Two-star (out of four) AccuScore hot trend pick on France in this one. Average score in simulations is France 2.05 to Denmark 0.59.