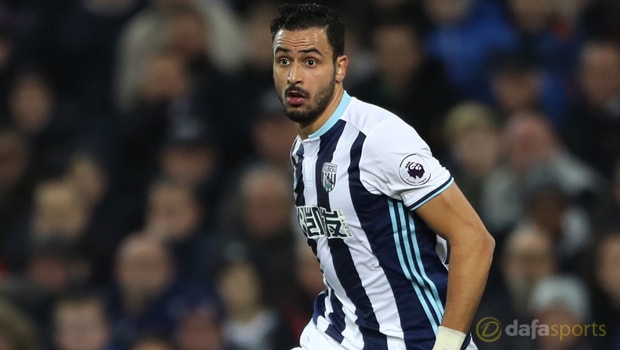 West Brom assistant coach Dave Kemp believes midfielder Nacer Chadli is starting to get back to his best ahead of the trip to his former club Tottenham on Saturday.

The Belgium international joined the Baggies from Tottenham, who are priced at 13.00 to win the Premier League, over the summer for a fee of £13million and made an immediate impact.

The 27-year-old netted four times in his first five games after making the switch but has recently been out injured.

Chadli missed two games in November after undergoing minor surgery on his knee to trim away some cartilage.

The former FC Twente man has struggled to rediscover the form which saw him justify his price tag just five months ago.

The midfielder has not hit the back of the net or provided an assist since the middle of October and was dropped to the bench for last weekend’s FA Cup loss to Derby.

However, he did come on as a substitute in the third-round clash and was dangerous as he looks to force his way back into contention.

Kemp admits Chadli has struggled to be consistent since his injury but feels there are signs of improvement as the Baggies look to build on a solid first half of the season which sees them sitting eighth in the Premier League.

“I’d agree he’s been a bit hit and miss since his knee surgery,” said Kemp.

“It has taken him a while to get back to his level but I think there were signs on Saturday that he’s getting back to form.

“When he came on as sub we started to see the sharpness again and if selected this Saturday, I’m hoping he’s back to the level we saw before his injury.

“He’s trained better since the weekend, he looks sharp again. I’m sure he’ll have the bit between his teeth, too.

He set the bar high in those first few games and that’s his standard as far as we’re concerned. But he was out for three weeks, it takes a while to get over it.”