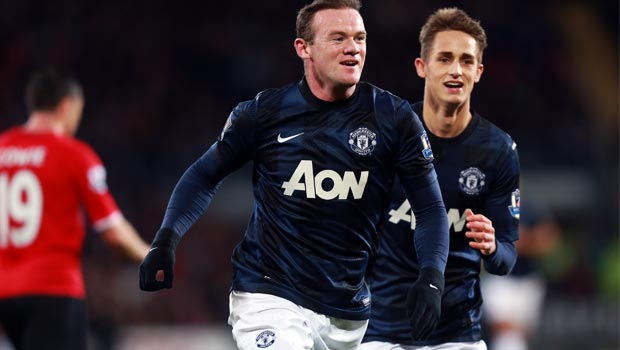 Manchester United boss David Moyes is delighted that Wayne Rooney has some ‘fire in his belly’ this season because he feels he plays at his best when he is ‘tough and aggressive’.

Moyes managed to persuade the England international to stay put at Old Trafford when he took over the hotseat from the retiring Sir Alex Ferguson in the summer.

There were claims that Rooney had handed in a transfer request after falling out of favour with Ferguson during the course of last season in which time he was played out of position and omitted from the team on several occasions by the veteran Scot.

However Moyes has made Rooney one of his first-choice forwards alongside Robin van Persie this season and is reaping the rewards as he has bagged six goals in 10 games.

With Van Persie out of Wednesday’s Champions League group game away at Bayer Leverkusen, Moyes will hope Rooney can fire the Red Devils into the knockout stages of the competition with a game to spare.

And, while Moyes has called on Rooney to curb the side of his temperament which could have resulted in a red card for kicking out at Jordan Mutch in Sunday’s 2-2 draw at Cardiff, he feels the 28-year-old is in his ideal frame of mind to perform well for United.

“He plays with his heart as well as the skills he has got in abundance.”

He added: “That is what a lot of people have said might have been missing from his game last season.

“It is certainly not missing now. He has the hunger and desire back.
He is committed for everything.”
In addition to Van Persie’s absence at the Bay Arena, Moyes will also be without skipper Nemanja Vidic and Michael Carrick because of respective concussion and Achilles problems, while Marouane Fellaini is suspended.

A win for United will secure their path to the last 16 but a draw will be enough should Shakhtar Donetsk lose to Real Sociedad in Group A’s other game.