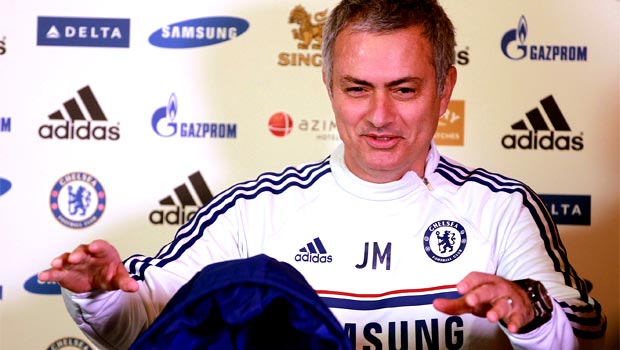 Chelsea boss Jose Mourinho has warned his players to be wary of the threat posed by Manchester United when they host the Premier League champions on Sunday.

The two clubs will head into the fixture having enjoyed differing fortunes over the first half of the campaign.

The Blues are third in the standings, just two points behind table-topping Arsenal, while David Moyes’ side find themselves in seventh place in the table and 11 points adrift of the Gunners.

Chelsea are second favourites at 3.90 to lift the trophy in May, with Manchester City the 2.10 favourites and Arsenal on offer at 4.33, while the Red Devils can be backed at 37.00 to mount an unlikely late challenge and defend their title.

But, despite the fact that United are so far behind the leaders, Mourinho is expecting nothing less than a full-blooded and tough encounter with the Old Trafford side.

“Man United are Man United. Eleven points is a big gap but I believe they’ll push all the way,” he said. “We play against the champions. We play Manchester United, not a team 11points behind the leaders.

“A team that appears to be in the most difficulty can be the most dangerous.”

Mourinho has revealed that new signing Nemanja Matic will not start on Sunday, but he hopes to have Frank Lampard in midfield, with Branislav Ivanovic also ruled out.

The Portuguese tactician also hopes Wayne Rooney and Robin van Persie are both fit for United as he feels it will help his side mentally.

“The best thing is to play against the best players, the concentration and motivation is bigger, so I hope they are there,” added the former Real Madrid chief.