Manchester City: Kompany wants it all 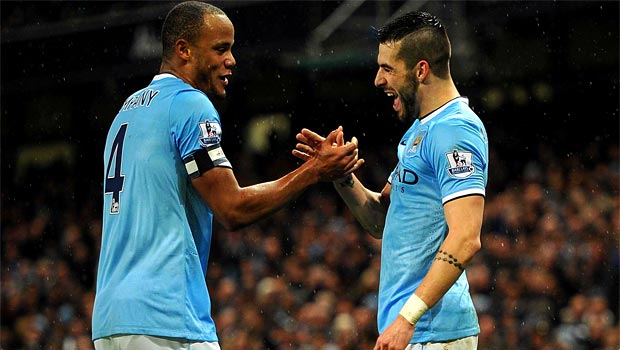 Club captain Vincent Kompany is confident that it is only a matter of time before Manchester City complete an unprecedented quadruple of titles.

The Etihad Stadium outfit are still challenging in all four competitions this term and are just one point behind table-topping Arsenal in the Premier League table.

They are assured of a place in the Capital One Cup final, having beaten West Ham 6-0 in the first leg of their semi-final, while an FA Cup fourth-round tie with Watford should not prove too much of a problem.

A mouth-watering Champions League last-16 clash with the mighty Barcelona is also on the horizon and that could prove to be a major stumbling block in the club’s attempts to win all four competitions this season.

But Kompany is convinced that at some stage in the future, the City players will be lifting a quartet of trophies in one campaign.

“We can’t promise it will happen now, but eventually it will have to happen,” he said.

“We are the players at the moment who have been chosen to do it. If it’s not us then it will be other players.”

City will look to keep up the pressure at the top of the table when they take on Cardiff at home on Saturday.

It is a daunting prospect for the Welsh club given the opposition’s record at home, as City have scored 64 goals from 16 games on their own patch this term, winning all 10 league games.

Conversely Cardiff have won just once away from home and it looks set to be a long afternoon for Ole Gunnar Solskjaer’s men.

But the visitors could have a few fresh faces in the ranks with new signings Matts Moller Daelhi and Magnus Wolffe Eikrem both available, while Jordon Mutch and Andrew Taylor are long-term injury absentees.

City should have both David Silva and Yaya Toure back from niggling injuries as they go in search of their 100th goal of a superb campaign and yet another three points.