Chelsea: Hazard can be one of the best – Mourinho 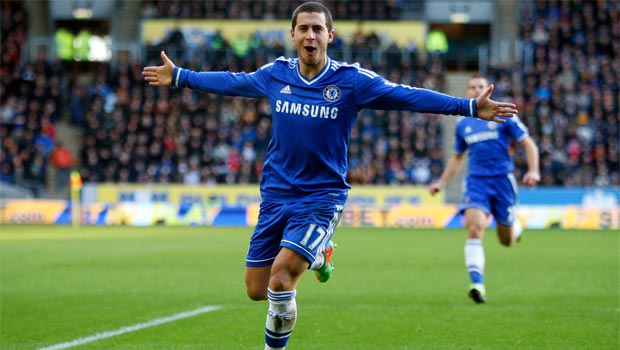 Chelsea manager Jose Mourinho insists that Eden Hazard has the potential to become one of the best players in the world.

The Belgium international admitted earlier this week that he wanted to reach the same level as Cristiano Ronaldo and Lionel Messi, and Mourinho is confident he can achieve it in the next few years.

The former Lille winger has arguably been Chelsea’s best player so far this season and Mourinho admits he could become a true superstar.

When asked if Hazard could reach the same level as Ronaldo and Messi, Mourinho said: “Yes, he can reach that level. It’s not just the quality of the players, but the number of goals they score that makes them even more special.

“If he wants to be a great, great player and arrive where Cristiano and Messi arrive, he has the space to go – he’s 23, and Cristiano is 28 or 29, Messi 26 or 27… still young players, but four or five years older than Eden.

“So he has the space to go, space for evolution. I think there’s a great ambition for him.”

Mourinho will be hoping that Hazard can once again lead his team to victory when they travel to the Etihad Stadium to face Manchester City.

Chelsea are currently priced at 3.60 to win the game, with City the heavy favourites at 1.92.