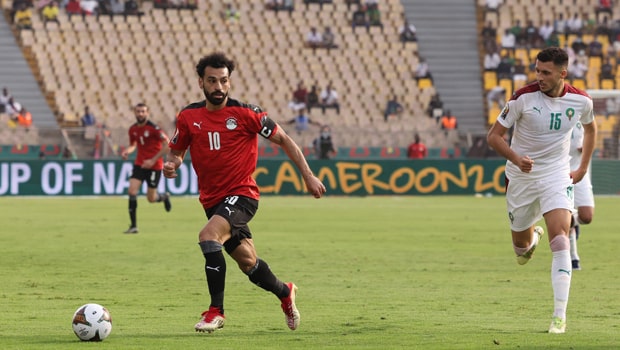 Mohamed Salah was in brilliant form as Egypt completed a comeback win against the Atlas Lions of Morocco in the quarter-final clash at the AFCON.

The Liverpool forward endured a slow start to the tournament as he was silenced in the opening game loss to the Super Eagles of Nigeria but found the back of the net against Guinea-Bissau.

The Pharaohs would go on to beat Sudan and Ivory Coast on penalties in the final group game and the round of 16 matches respectively without Salah finding the back of the net.

However, the North African derby started with Morocco taking the lead in the first half through Sofiane Boufal’s sixth-minute penalty. The Atlas Lions went into the break in the lead but Mohamed Salah quickly pulled the seven-time champions level in the 53rd minute.

Neither side could find the breakthrough in the ninety minutes, but Salah found the decisive pass for Trezeguet ten minutes into extra time as Egypt kept their hopes for an 8th AFCON title alive.

Egypt last played in the final of the AFCON in 2017 when they lost to Cameroon. However, the hosts will be the next team between them and a place in the final next weekend.

Cameroon made a light work of debutants the Gambia in their 2-0 win in the quarter-final with Toko Ekambi scoring a second-half brace. The Lyon forward has now scored a total of 5 goals, one behind Vincent Aboubakar in the competition.

Nevertheless, the semifinal will be Cameroon’s toughest test yet in the competition. Earlier on Sunday, Senegal shrugged a stubborn Equatorial Guinea in a 3-1 victory, they will face Burkina Faso next in the semifinal.

The Teranga Lions played in the last final against Algeria but will have to get past Burkina Faso, who defeated Tunisia on Saturday.