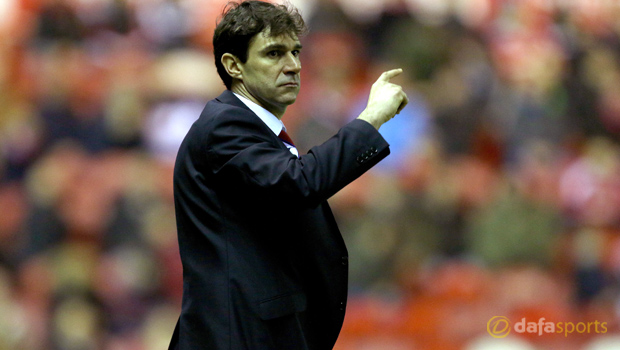 Middlesbrough boss Aitor Karanka may have been relieved his side did not have to deal with the threat of Blackburn striker Jordan Rhodes on Boxing Day.

The clash between high-flying Middlesbrough and Paul Lambert’s Rovers was postponed after heavy rain made the Ewood Park surface unplayable.

Karanka tried to sign Rhodes in the summer, with Blackburn rejecting an offer of £12m for the Scotland international.

Despite Middlesbrough being second in the Championship table with eight wins from their last ten games, Karanka is still a big admirer of the Blackburn forward.

Rhodes was keen to talk to the Riverside club in the summer but, with Blackburn unwilling to sell, he has knuckled down at Ewood Park and contributed nine goals this season despite his team struggling for long spells under previous manager Gary Bowyer.

His performances have convinced Karanka he was right to covet the 25-year-old.

“His performances this season show why we wanted to sign him and why Blackburn did not want to sell him,” said Karanka.

“He is a really good player. He has conducted himself really well this season but I did not have any doubt that he would do that.”

Steve Agnew, a former Blackburn player and Rhodes’ uncle, is Karanka’s assistant manager at Middlesbrough and so the Spaniard says he never had any doubts that Rhodes would have proved to be a good signing.

“When you hear his uncle speak about Jordan, you can tell that he is a really good kid,” Karanka said.

“His performances are always good and he is always scoring goals.”

Blackburn are 21.00 to earn promotion this season while Middlesbrough are 2.00 to win the Championship.